CALL US EMAIL US

Kitchen Installers from KitchenInstallation.ca got HomeStars’s Best of 2014, 2017, 2018 Toronto Award

Each year, hundreds of companies across Canada are celebrated as HomeStars’s Best

February 24, 2015 KitchenInstalaltion.ca was awarded the Homestars Best of 2014 Award for Kitchen Instalaltion in Toronto. This award is presented to companies who have consistently received excellent reviews from their clients.  A celebration was held at The Rattlesnake Golf and Country Club on February 24th where all of the “Best of” recipients received their awards. 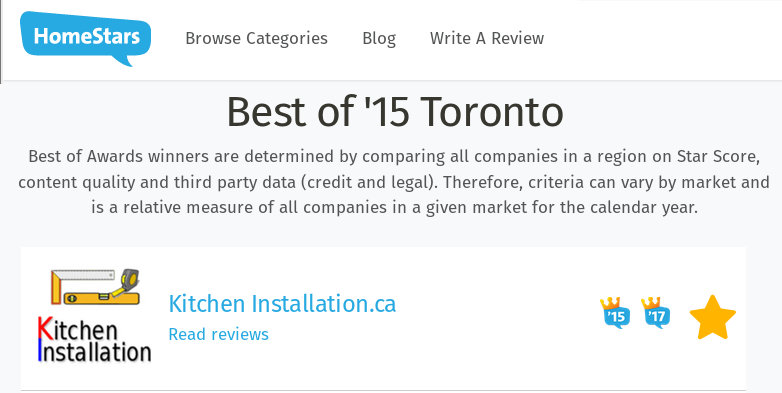 The goal of the Best of Awards is to provide homeowners with an indication of which companies are the best. Winners are determined based on our proprietary ‘Best of Award’ Reputation Rank algorithm, which uses a number of different factors (more than 15) each uniquely weighted.  It’s more than simply number of reviews and the score.

This site is intended as a source of information for those interested in IKEA products Installation and is not affiliated with IKEA in any way. Information contained on these pages is offered as a compilation of individuals' experiences with IKEA products. The authors assume no responsibility for the accuracy of the information. The IKEA logo and IKEA wordmark are registered trademarks of Inter IKEA Systems B.V. For more detailed information, please see our Terms and Conditions, Privacy Policy.